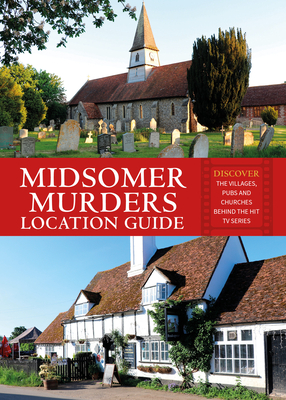 
Not On Our Shelves—Ships in 1-5 Days
Following in the Pitkin Armchair film and TV locations series, Midsomer Murders Location Guide highlights the real-life locations behind the fictional Midsomer County—the pubs, churches, and villages that make it such an international success.

Midsomer Murders turns twenty-five in 2022, and to celebrate a quarter-century of Detective Chief Inspector Tom Barnaby unraveling the murderous deeds of rural folk, Pitkin is launching a guide that pinpoints the most popular locations used for filming the series.

The first episode, “The Killing at Badger’s Drift,” was an immediate ratings success in 1997 when John Nettles returned to television as DCI Barnaby after ten years of playing Sergeant Jim Bergerac. Nettles went on to star in eighty-one episodes of Midsomer Murders before retiring in 2010 and handing the reins to his cousin, John Barnaby. The series is sold around the world and is known as Barnaby in Europe, so it needed a DCI Barnaby at the helm. Actor Neil Dudgeon, who appeared as an amorous gardener in the series four episode “Garden of Death,” took the part.

The location guide highlights some of the familiar pubs, churches, villages, and countryside that can be visited. The Lions of Bledlow has been five different pubs in its Midsomer lifetime, while the Crown Inn at Sydenham can claim at least three. Villages clustered around the Oxfordshire-Buckinghamshire border—Turville, Hambleden, Fingest, Haddenham, and Long Crendon—are favorite backdrops.

While many of the grand country houses are private residences, a few, such as Mapledurham and Greys Court, are administered by the National Trust. Plus, there are many ancient churches to admire, quite often the scene of grisly goings-on in the vestry. Ask Mark Gatiss about the Sword of Guillaume!

With all 128 episodes available on BritBox, fans of the show can watch old episodes with Midsomer Murders Location Guide in hand and spot exactly where DCI Barnaby brings the sometimes unlikely villains to book.

Frank Hopkinson is the author of The Joy of Pubs and the National Trust’s book on beekeeping, as well as the photographer for Remarkable Village Cricket Grounds. All three subjects regularly occur in Midsomer Murders. He has worked on arable farms and hop farms, and in his final year at London University, he undertook a rural housing survey on the borders of Gloucestershire and Oxfordshire. Hence, he recognizes many of the characters regularly encountered by DCI Barnaby.