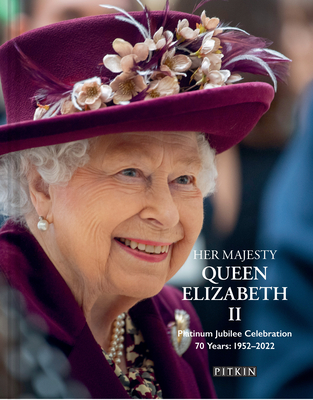 
Backordered
A celebration of Her Majesty Queen Elizabeth II, detailing the highlights and challenges of her seventy-year reign.

Her Majesty Queen Elizabeth II has carried out her role as sovereign with flawless professionalism. Her demeanor has been perfect, and in the seventy years she has reigned, she has epitomized all the hallmarks of an iconic sovereign beloved by her people.

When she succeeded her father, King George VI, on February 6, 1952, Elizabeth was only twenty-five years old. Married for just five years with two young children, her life changed irrevocably. The responsibilities of the monarchy have taken precedence over all else, and the public duties invariably have first call on the Queen’s time and energy.

This book celebrates the highlights and challenges of the Queen’s reign over the past seven decades by recalling Princess Elizabeth’s childhood and the war years; including accounts of the accession and coronation when she was still a young woman; detailing each decade of Queen Elizabeth II’s reign, focusing on both her working life and her family; describing in detail a typical working day for the sovereign; providing a special focus on the enduring contribution Her Majesty has made to life in the UK and the Commonwealth, as well as her enviable reputation worldwide; and offering a true celebration in honor of the Queen’s Platinum Jubilee.

Brian Hoey is the author of thirty-six books about royalty and has interviewed many members of the royal family. He was one of the BBC’s first royal newscasters and contributes to newspapers and magazines throughout the world on royal matters.