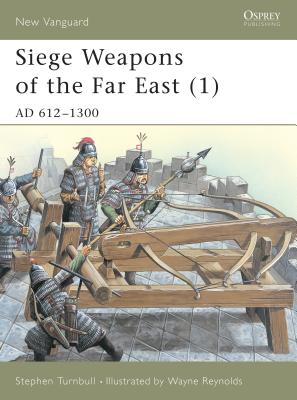 This is book number 43 in the New Vanguard series.

The prevalence of particular fortress types in medieval China, Mongolia, Japan and Korea demanded the evolution of different modes of siege warfare in each country. The wealthy walled towns of China, the mountain fortresses of Korea and the military outposts of Japan each presented different challenges to besieging forces, and this book reveals the diversity of tactics that were developed to meet these challenges. Most of the Far Eastern weaponry of this period originated in China, but was adapted to fit the demands of siegecraft across the region and the individual strengths and weaknesses of each piece of machinery are studied here.
Stephen Turnbull is widely recognised as the world's leading English language authority on the samurai of Japan. He took his first degree at Cambridge and has two MAs (in Theology and Military History) and a PhD from Leeds University. He is now retired and pursues an active literary career, having now published 85 books. His expertise has helped with numerous projects including films, television and the award-winning strategy game Shogun Total War.