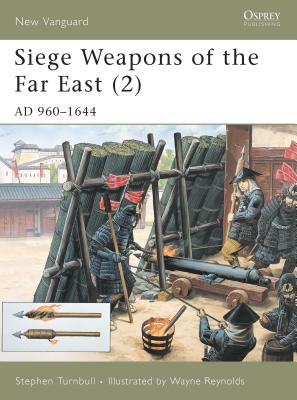 This is book number 44 in the New Vanguard series.

From the 11th century AD, East Asian armies made increasing use of exploding missiles and siege cannon to reduce the fortifications of their enemies. Some of these weapons were very similar to those used in Europe - for example, the heavy siege cannon used in the siege of P'yongyang during the Japanese invasion in the late 16th century. Others, like the Korean hwach'a carts mounting over a hundred rockets that were used to bombard the Japanese at Haengiu in 1593, were very different from their European contemporaries. This book details the design and use of the wide range of weaponry available during this period.
Stephen Turnbull is widely recognised as the world's leading English language authority on the samurai of Japan. He took his first degree at Cambridge and has two MAs (in Theology and Military History) and a PhD from Leeds University. He is now retired and pursues an active literary career, having now published 85 books. His expertise has helped with numerous projects including films, television and the award-winning strategy game Shogun Total War.