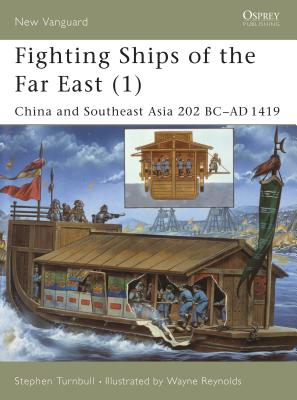 This is book number 61 in the New Vanguard series.

Fighting Ships of the Far East (1) adds enormously to the hitherto small corpus of knowledge about a fascinating and little known subject. Using detailed descriptions, accurate cutaway plates and reliable historical examples, this book covers the history of Chinese ship design and naval warfare from the beginning of the Han dynasty to the first few years of the Ming dynasty. The epic battle of Lake Poyang in in 1363, won by the man who was to become the first Ming Emperor, is also detailed.
Stephen Turnbull is widely recognised as the world's leading English language authority on the samurai of Japan. He took his first degree at Cambridge and has two MAs (in Theology and Military History) and a PhD from Leeds University. He is now retired and pursues an active literary career, having now published 85 books. His expertise has helped with numerous projects including films, television and the award-winning strategy game Shogun Total War.