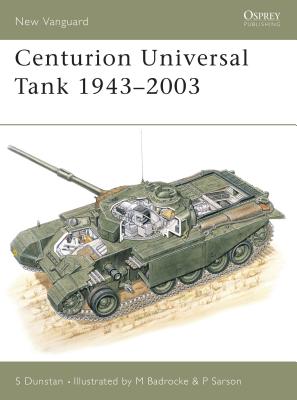 This is book number 68 in the New Vanguard series.

From 1943 the British began the design of a tank that bore distinct similarities to the German Panther tank. Designed as a Universal Tank, the design emerged in mid-1945 as the Centurion. It was last used in action by the British Army in 1991 during the Gulf War. It has also seen action with the Israeli Defence Forces, the Indian Army in the wars with Pakistan and the Australian Army in Vietnam. This book details all the variants of the Centurion used in these conflicts as well as covering the specialised variants last used by the British in the Gulf War.
Simon Dunstan is a well-established author, film maker and photographer in the field of military history, with several titles already published with Osprey. He specialises on the subject of armoured warfare, a field on which he has been writing for two decades. His books have covered topics such as helicopter and armoured warfare in Vietnam, the Challenger main battle tank, The British Guards and armoured warfare in Korea. Simon lives and works in London