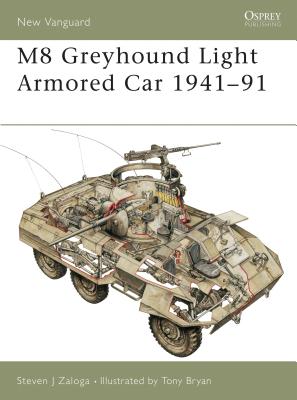 This is book number 53 in the New Vanguard series.

The M8 light armored car was the only significant wheeled combat vehicle used by the US Army in World War II. In conjunction with the lightly armed utility version, the M20, it was the staple of the army's cavalry squadrons for use in reconnaissance and scouting. First entering combat in Italy in 1943, it was widely used throughout the campaign in northwest Europe, though its off-road performance was found to be wanting. This title describes the design and development of the M8, covering the many variants that were produced during World War II and afterwards, along with a comprehensive survey of its operational use.
Steven J. Zaloga received his BA in History from Union College and his MA from Columbia University. He has worked as an analyst in the aerospace industry for four decades, covering missile systems and the international arms trade, and has served with the Institute for Defense Analyses, a federal think tank. He is the author of numerous books on military technology and history, including NVG 294 Allied Tanks in Normandy 1944 and NVG 283 American Guided Missiles of World War II. He currently lives in Maryland, USA.