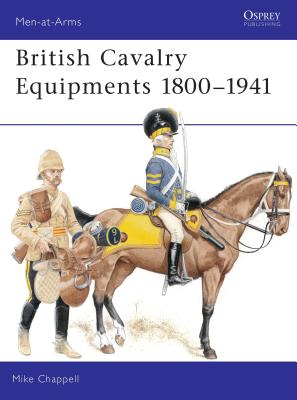 This revised edition of Mike Chappell's original Men-at-Arms 138 represents nearly 20 years' new research. It covers the saddlery, horse furniture, and personal equipment of the British horsed cavalryman from the early stages of the Napoleonic Wars until the final disappearance of the mounted arm during World War II. Such details are essential for an understanding of how cavalry fought in the 19th and early 20th centuries, since the design of equipment was intimately connected with cavalry tactics in any particular period. Students of campaign history, and particularly modellers, will find here a mass of specific information, illustrated with photographs, diagrams, drawings and full colour plates.
Mike Chappell comes from an Aldershot family with British Army connections stretching back several generations. He enlisted as a teenage private in the Royal Hampshire Regiment in 1952 and retired in 1974, as RSM of the 1st Battalion The Wessex Regiment (Rifle Volunteers), after seeing service in Malaya, Cyprus, Swaziland, Libya, Germany, Ulster and home garrisons. He began painting military subjects in 1968 and since then has gained world-wide popularity as a military illustrator. Mike has also written and illustrated many books in the Osprey Military list.