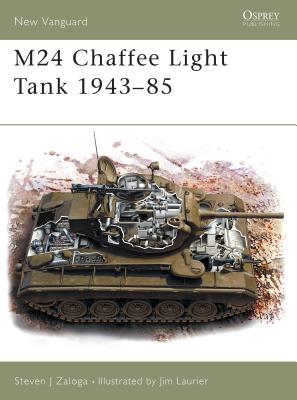 This is book number 77 in the New Vanguard series.

The history of US light tanks during World War II is a chequered one. The Light Battalions of US Armored Divisions were initially filled with M3A1 and M5 Stuart tanks, however, on the battlefields of North Africa it was realised that these were disastrously under armoured and gunned, and a replacement, or the abandonment of light tank doctrine, was desperately needed. It wasn't until the last few months of WWII that the M24 Chaffee came into service and it was extensively used in combat from the Battle of the Bulge to the final campaigns in Germany. This book will trace the history of this design, its combat record in World War II, its many variants, and its extensive combat record post 1945.
Steven J. Zaloga received his BA in History from Union College and his MA from Columbia University. He has worked as an analyst in the aerospace industry for four decades, covering missile systems and the international arms trade, and has served with the Institute for Defense Analyses, a federal think tank. He is the author of numerous books on military technology and history, including NVG 294 Allied Tanks in Normandy 1944 and NVG 283 American Guided Missiles of World War II. He currently lives in Maryland, USA.