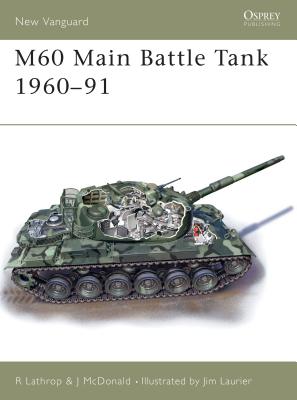 This is book number 85 in the New Vanguard series.

Entering service in the early 1960s, the M60 tank was in production for 23 years and formed the backbone of US Army and Marine armoured units during the Cold War. Over 15,000 were built in four basic models: the M60, M60A1, M60A2, and the M60A3. Although the M60 had been phased out of US Army service by the time Iraq invaded Kuwait in 1990, M60s were amongst the first Allied tanks to enter Kuwait City with the US Marines. This book examines the design and deployment of the M60, a very widely used vehicle that is still in service today.
Jim Laurier is a native of New England and lives in New Hampshire. He attended Paier School of Art in Hamden, Connecticut, from 1974–78, and since graduating with Honours, he has been working professionally in the field of Fine Art and Illustration. He has been commissioned to paint for the US Air Force and has aviation paintings on permanent display at the Pentagon.