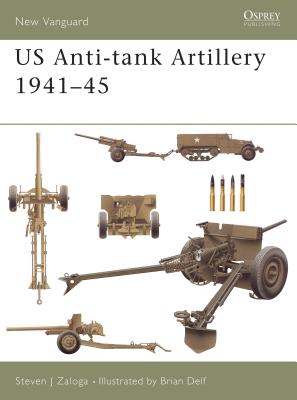 This is book number 107 in the New Vanguard series.

The US Army's development of the 37mm anti-tank gun began in response to needs identified during the Spanish Civil War. By the time it entered service in Tunisia in 1943, the gun was already obsolete, and the US began the licensed manufacture of the British 6-pdr in the hope of finding a quick solution to its artillery requirements. This in turn proved unequal to the demands of warfare in France in 1944, and further anti-tank measures were developed – rocket propelled grenades for infantry use, and weapons designed specifically for use by the Tank Destroyer Force.
Steven J. Zaloga received his BA in History from Union College and his MA from Columbia University. He has worked as an analyst in the aerospace industry for four decades, covering missile systems and the international arms trade, and has served with the Institute for Defense Analyses, a federal think tank. He is the author of numerous books on military technology and history, including NVG 294 Allied Tanks in Normandy 1944 and NVG 283 American Guided Missiles of World War II. He currently lives in Maryland, USA.
“This is a well thought out book with just the right amount of information and pictures for the modeler. The Author does not drag out the explanations and makes it very easy for the laymen to understand and follow along...Overall this is a great book for anyone interested in US Anti Tank development and use. I highly recommend this book.” —Bryan Gray, Armorama (May 2005)