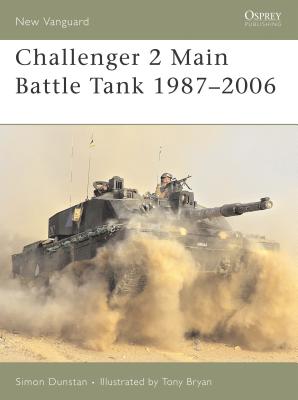 This is book number 112 in the New Vanguard series.

The Challenger 2 is the current Main Battle Tank of the British Army and represents the culmination of 80 years of tank design. In 1987, its design was presented to the Ministry of Defence in response to a requirement to replace the Chieftain MBT that had been partially superseded by the Challenger 1 MBT. Production began in 1993, and the tank finally entered service in 2002. The tank recently appeared in Iraq, where it proved indispensable during the battle of Basra. This book covers the evolution of the Challenger 2, from its origins and testing to its involvement in the Middle East and Iraq.
Simon Dunstan is a well-established author, filmmaker and photographer in the field of military history, with several titles already published with Osprey. He specializes in the subject of armoured warfare, a field in which he has been writing for two decades. His books have covered topics such as helicopter and armoured warfare in Vietnam, the Challenger 1 Main Battle Tank, the British Guards and armoured warfare in Korea. Simon lives and works in London.

"[This] is a good book for British armour fans and modelers alike. It shows good details on the Challenger 2 and its development and history. It is definitely an asset to have on the shelf." -Gino P. Quintiliani, Armorama (April 2006)