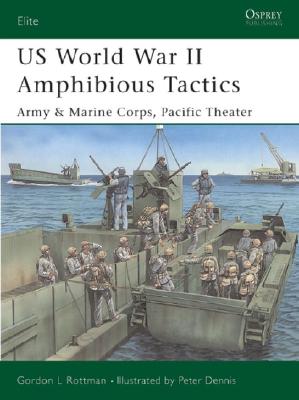 This is book number 117 in the Elite series.

Osprey's study of the United States' naval tactics during World War II (1939-1945
). The US armed forces were responsible for many tactical innovations during the years 1941–45, but in no field was US mastery more complete than amphibious warfare. In the vast, almost empty battlefield of the Pacific the US Navy and Marine Corps were obliged to develop every aspect of the amphibious assault landing in painstaking detail, from the design of many new types of vessel, down to the tactics of the rifle platoon hitting the beach, and the logistic system without which they could not have fought their way inland. This fascinating study offers a clear, succinct explanation of every phase of these operations as they evolved during the war years, illustrated with detailed color plates and photographs.

“US World War II Amphibious Tactics will provide the enthusiast of the European and North African theaters an affordable, concise overview of equipment, formations and tactics utilized in the massive sea-borne landings during WWII.” —John Adams-Graf, Military Trader Magazine

“I have to tell you that I found a lot of new information in this book. It also showed me that an amphibious assault took a great deal of planning and coordination to pull off, so it is pretty amazing that they all worked out. It is a book that I know you'll enjoy and [I] recommend it without hesitation.” —Scott Van Aken, modelingmadness.com