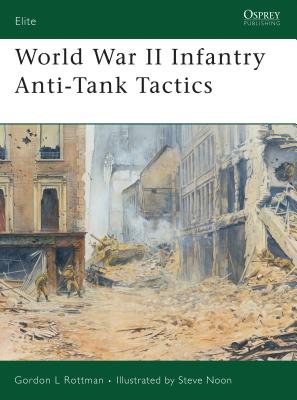 This is book number 124 in the Elite series.

The battlefield interaction between infantry and tanks was central to combat on most fronts in World War II (1939-1945). The first 'Blitzkrieg' campaigns saw the tank achieve a new dominance. New infantry tactics and weapons – some of them desperately dangerous – had to be adopted, while the armies raced to develop more powerful anti-tank guns and new light weapons. By 1945, a new generation of revolutionary shoulder-fired AT weapons was in widespread use. This book explains in detail the shifting patterns of anti-tank combat, illustrated with photographs, diagrams and colour plates showing how weapons were actually employed on the battlefield.
Gordon L. Rottman entered the US Army in 1967, volunteered for Special Forces and completed training as a weapons specialist. He served in the 5th Special Forces Group in Vietnam in 1969–70 and subsequently in airborne infantry, long-range patrol and intelligence assignments until retiring after 26 years. He was a Special Operations Forces scenario writer at the Joint Readiness Training Center for 12 years and is now a freelance writer, living in Texas.

Steve Noon was born in Kent, UK, and attended art college in Cornwall. He's had a life-long passion for illustration, and since 1985 has worked as a professional artist. He has provided award-winning illustrations for the publishers Dorling Kindersley, where his interest in historical illustration began. Steve has illustrated over 70 books for Osprey.