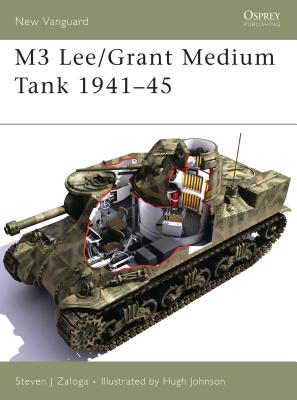 This is book number 113 in the New Vanguard series.

The highly successful 'stop-gap' M3 medium tank was designed in 1941, and as adequate turret casting facilities were not yet ready, the M3 used an unusual armament configuration patterned after a French tank. British lend-lease demands led to the design of a second turret type with the US version called the Lee and the British version the Grant. It could penetrate Panzer armor, and its explosive firepower was excellent for dealing with German anti-tank guns. This book covers the design, development, service and variants of a vehicle that was the backbone of many World War II forces.
Steven J. Zaloga received his BA in History from Union College and his MA from Columbia University. He has worked as an analyst in the aerospace industry for four decades, covering missile systems and the international arms trade, and has served with the Institute for Defense Analyses, a federal think tank. He is the author of numerous books on military technology and history, including NVG 294 Allied Tanks in Normandy 1944 and NVG 283 American Guided Missiles of World War II. He currently lives in Maryland, USA.