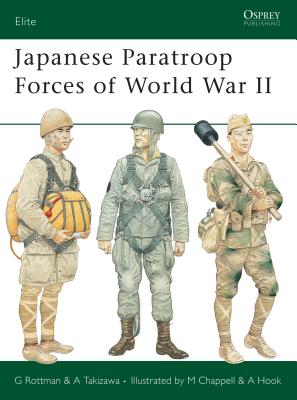 This is book number 127 in the Elite series.

Osprey's examination of Japan's parachute units of World War II (1939-1945). For the first time in English, this book offers a concise but fact-packed account of the organization, equipment, and all operations of Japan's small but elite wartime parachute forces. Correcting and amplifying previous accounts based on wartime intelligence, it traces the Imperial Army's Raiding Regiments and the Imperial Navy's parachute-trained Yokosuka 1st & 3rd Special Naval Landing Forces from the first trials units, through their successful assaults in early 1942, to the last desperate battles and raids of 1944–45. The text is illustrated with rare photographs, and meticulously reconstructed color artwork of the men and their gear.
Gordon L. Rottman entered the US Army in 1967, volunteered for Special Forces and completed training as a weapons specialist. He served in the 5th Special Forces Group in Vietnam in 1969–70 and subsequently in airborne infantry, long-range patrol and intelligence assignments until retiring after 26 years. He was a Special Operations Forces scenario writer at the Joint Readiness Training Center for 12 years and is now a freelance writer, living in Texas.

Adam Hook studied graphic design, and began his work as an illustrator in 1983. He specializes in detailed historical reconstructions, and has illustrated Osprey titles on subjects as diverse as the Aztecs, the Ancient Greeks, Roman battle tactics, 19th-century American subjects, the modern Chinese Army, and the history of fortification. His work features in exhibitions and publications throughout the world.

Richard Hook is an internationally acclaimed artist, renowned for his paintings of Native American culture.

“The book concisely encompasses the paratroops' organization, equipment and operations ... The history includes the parachute-trained units' first tirals, their first successful assaults in early 1942, and raids and battles of 1944-45. Color illustrations of the Japanese troops and their equipment are accompanied by rare photographs.” —Tony Little, Toy Soldier & Model Figure (April 2008)