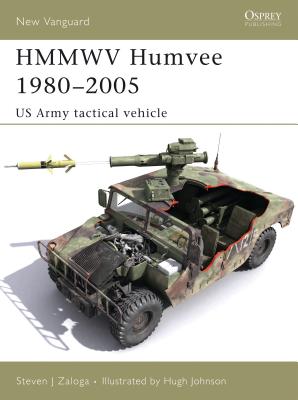 This is book number 122 in the New Vanguard series.

The HMMWV, better known as the Humvee or Hummer, has set the world standard for army tactical vehicles since its introduction into the US Army in the 1980s. Designed to be the successor to the jeep of World War II with a greater load-bearing capacity, the Humvee has proven to be adaptable to a wide range of roles, including weapons carrier, missile launcher, command vehicle and other specialized types. This book traces the development and use of the Humvee and its variations, including the latest families of armored Humvees used in Iraq in 2003-05, and its adoption in a peacekeeping role the world over.
Steven J. Zaloga received his BA in History from Union College and his MA from Columbia University. He has worked as an analyst in the aerospace industry for four decades, covering missile systems and the international arms trade, and has served with the Institute for Defense Analyses, a federal think tank. He is the author of numerous books on military technology and history, including NVG 294 Allied Tanks in Normandy 1944 and NVG 283 American Guided Missiles of World War II. He currently lives in Maryland, USA.
“... an excellent introduction to the vehicle line, with the bonus of many gripping in-actions photographs that you won't find anywhere else.” —Military Vehicles, featured in the MV Enthusiast's Holiday Present Helper