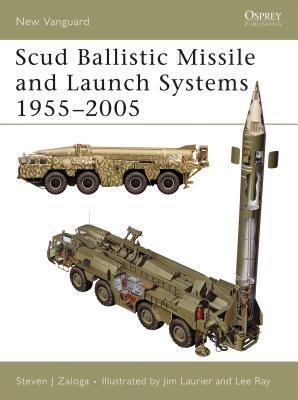 This is book number 120 in the New Vanguard series.

The Scud missile was developed as the centerpiece of Soviet plans to fight nuclear war in the heart of Europe. However, it was never used in its intended role and has instead become a symbol of the changing nature of warfare in the aftermath of the Cold War. Saddam Hussein's Iraqi armed forces were almost helpless in the face of the Coalition forces in the 1991 Gulf War; the only weapon that Iraq could use to injure the Coalition forces was its arsenal of Scud missiles. This book explores the development and variants of the missile and its launch systems, its proliferation outside of the West, and its role in conflicts around the world.
Steven J. Zaloga received his BA in History from Union College and his MA from Columbia University. He has worked as an analyst in the aerospace industry for four decades, covering missile systems and the international arms trade, and has served with the Institute for Defense Analyses, a federal think tank. He is the author of numerous books on military technology and history, including NVG 294 Allied Tanks in Normandy 1944 and NVG 283 American Guided Missiles of World War II. He currently lives in Maryland, USA.

“Highly recommended for anyone interested in Soviet or Russian military equipment or in particular, artillery and ballistic missiles.” —Jacques Duquette, Armorama (April 2008)