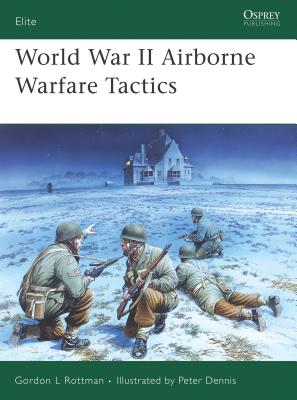 This is book number 136 in the Elite series.

Osprey's study of air battle tactics of World War II (1939-1945). The delivery of entire divisions to battlefields behind enemy lines by parachute and glider played a significant part in the European campaigns of World War II. Despite notable successes, the costs and difficulties of this wholly new form of warfare have prevented airborne operations on a comparable scale since 1945. This book - by an airborne veteran of a later generation - explains in detail their advantages and drawbacks, developing techniques and equipment, with reference to specific German, US, British, Soviet and Japanese operations. The text is illustrated with period photographs, colour artwork and operation maps.
Gordon L. Rottman entered the US Army in 1967, volunteered for Special Forces and completed training as a weapons specialist. He served in the 5th Special Forces Group in Vietnam in 1969–70 and subsequently in airborne infantry, long-range patrol and intelligence assignments until retiring after 26 years. He was a Special Operations Forces scenario writer at the Joint Readiness Training Center for 12 years and is now a freelance writer, living in Texas.

“As with other Osprey books, this is well-written and fun to read... This text offers a good overview of both Allied and Axis airborne operations in WWII; it is particularly nice to see the less well-know Soviet and Japanese forces included.” —Michael Koznarsky, Historical Miniature Gamer Magazine

“...this book provides an excellent overview and summary of World War II airborne force development. It is an excellent starting point for anyone interested in the history of airborne warfare and contains a further reading guide to a variety of titles and topics for anyone interested in more detailed information... Overall, the book is a valuable contribution to literature pertaining to airborne operations of World War II and provides an outstanding and clear overview of a very complex subject.” —Captain David Wray, Canadian Army Journal (Summer 2006)