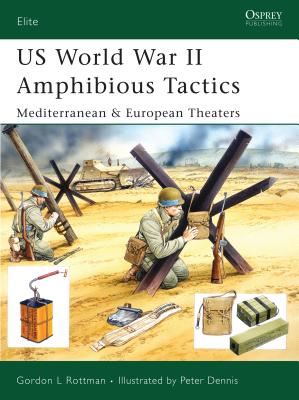 This is book number 144 in the Elite series.

Osprey's examination of the United States' amphibious tactics during World War II (1939-1945). The US armed forces were responsible for many tactical innovations during the years 1941-5, but in no field was US mastery more complete than amphibious warfare. The US armed forces pioneered amphibious warfare in the Pacific and later in the Mediterranean but it was against Fortress Europe that the most famous and the most successful amphibious assault took place. On D-Day the Allies invaded German-held Normandy in a pre-dawn amphibious assault by American, British and Canadian forces. The US had perfected the special equipment and tactics for this extraordinarily difficult and risky form of warfare and despite large casualties during the beach assaults they were ultimately successful. This book explains, in accessible terms, the many problems associated with amphibious warfare and how they were overcome in the Mediterranean and European Theaters, and is illustrated with photographs, maps, diagrams and colour plates that support the explanations and bring the whole complex process to life.
Gordon L. Rottman entered the US Army in 1967, volunteered for Special Forces and completed training as a weapons specialist. He served in the 5th Special Forces Group in Vietnam in 1969–70 and subsequently in airborne infantry, long-range patrol and intelligence assignments until retiring after 26 years. He was a Special Operations Forces scenario writer at the Joint Readiness Training Center for 12 years and is now a freelance writer, living in Texas.

“US World War II Amphibious Tactics will provide the enthusiast of the European and North African theaters an affordable, concise overview of equipment, formations and tactics utilized in the massive sea-borne landings during WWII.” —John Adams-Graf, Military Trader Magazine

“I have to tell you that I found a lot of new information in this book. It also showed me that an amphibious assault took a great deal of planning and coordination to pull off, so it is pretty amazing that they all worked out. It is a book that I know you'll enjoy and [I] recommend it without hesitation.” —Scott Van Aken, modelingmadness.com