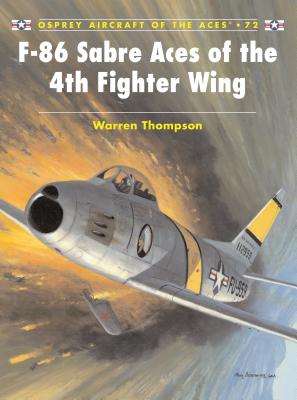 
Special Order—Subject to Availability
The entry of the United State's premier jet interceptor into the Korean War was triggered by the ever-increasing presence of the Soviet-built MiG-15 south of the Yalu River. The possibility of the USAF losing air supremacy over the Korean Peninsula was unacceptable. The 4th Fighter Wing got the call for combat in Korea. They were made up of a combination of new pilots right out of jet training and the older combat veterans of World War II vintage. This combination of pilot types wrote and re-wrote the text books on jet warfare. Of the 40 jet aces that the war produced, the 4th Wing boasted 24 of them. They also were the dominating MiG killer outfit with the USAF.
Warren Thompson has been an avid military aviation historian and editor for over 40 years and his personal reference collection includes thousands of photos and detailed interviews with over 2,000 pilots and aircrew members. He has had 25 books published including three books on the Korean War for Osprey. His book Korean War Aces in the Aircraft of the Aces series was a bestseller.

“Overall, a superb read and an excellent reference that I can recommend without reserve.” —Scott Van Aken, modelingmadness.com

“Both words and pictures are, as always, strongly recommended, and the Sabre must be among the top five iconic fighters.” —Mike McEvoy, Scale Aircraft Modelling