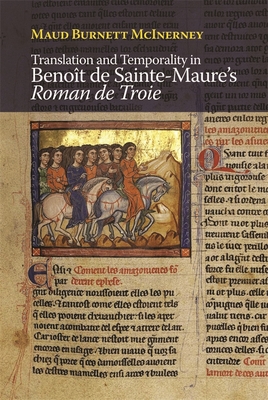 
Not On Our Shelves—Ships in 1-5 Days
(This book cannot be returned.)
An exciting new approach to one of the most important texts of medieval Europe. The story of the Trojan War has been told and retold across the ages, from Homer's Iliad and Virgil's Aeneid to recent film and television adaptations. The peoples of medieval Europe were especially enthralled with the tale of the siege of the great city by the Greeks, and by the fourteenth century virtually every royal house in Europe traced its ancestry to some long-ago Trojan warrior. The medieval West, however, had no access to Homer, and though Virgil was certainly read, the most influential version of the Troy story for centuries was that recounted in the Roman de Troie, by Beno t de Sainte Maure. This massive poem in Old French claimed to be a translation of two eyewitness accounts of the War, both actually late antique forgeries, but it is in reality a largely original tapestry of chivalric exploits, elaborate descriptions and marvellous creatures such as centaurs and Amazons. The love story of Troilus and Briseida was invented in its pages, later inspiring Boccaccio, Chaucer and Shakespeare. The huge popularity of the Roman de Troie allowed medieval dynasties to create new kinds of political authority by extending their pedigrees back into days of legend, and was an essential element in the inauguration of a new genre, romance.
This book uses approaches from theories of translation and temporality to develop its analysis of the Roman de Troie and its context. It reads the text against Geoffrey of Monmouth's History of the Kings of Britain to argue that Beno t is a participant in the Anglo-Norman invention of a new kind of history. It develops readings grounded in both gender studies and queer theory to demonstrate the ways in which the Roman de Troie participates in the invention of romance time, even as it uses its queer characters to cast doubt upon the optimistic genealogical fantasies of romance. Finally, it argues that the great series of ekphrastic passages so characteristic of the Roman de Troie operate as lieux de m moire, epitomizing the potential of poetry to stop time, at least in the moment. The author also provides an overview of the complex manuscript tradition of the Roman de Troie in support of the contention that the text deserves to be central to any study of medieval literature.