Joseph Rotblat: A Man of Conscience in the Nuclear Age (Paperback) 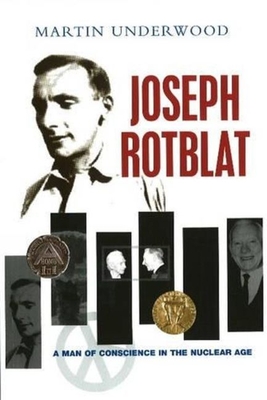 Joseph Rotblat: A Man of Conscience in the Nuclear Age (Paperback)


Special Order—Subject to Availability
Professor Sir Joseph Rotblat was a distinguished scientist who made a significant contribution to nuclear physics, worked on the development of the atomic bomb (he was the only person to leave the Manhattan Project), and was suspected of being a Soviet spy. After Hiroshima and Nagasaki, he became a peace campaigner and dedicated himself to the medical uses of nuclear physics and radiation. He took up the post of Professor of Physics (as applied to medicine) at St. Bartholomew's Medical College in London and made major contributions to this field, becoming one of the world's leading researchers into the biological effects of radiation. Rotblat's life, from the early 1950s until his death in August 2005, was devoted to the abolition of nuclear weapons and the promotion of world peace. His work ranked with that of Albert Einstein and Bertrand Russell. He helped found The Pugwash Conferences on Science and World Affairs, and, together with Pugwash, he was awarded the Nobel Peace Prize in 1995. Rotblat promoted dialogue between Soviet and Western scientists during the Cold War, initiated discussions to end the Vietnam War, and was instrumental in bringing about a partial nuclear weapons test-ban treaty. In this book, author Martin Underwood, who worked with Sir Joseph Rotblat, describes his personal background and circumstances; summarizes his life, achievements, and contributions to mankind; and outline his views on the moral responsibilities of scientists. This book will appeal to all those interested in the development of nuclear weapons, the growth of the anti-nuclear movement, and the peaceful uses of radioactivity.
“Martin Underwood has written a fine and crucial narrative of one of the great heroes of the twentieth century. The only scientist to resign his Manhattan Project post on learning that Germany would not make an atom bomb, Rotblat fulfilled his ideal that a scientist is first and foremost a human being. Rotblat's subsequent life-long campaign to eliminate nuclear weapons, and ultimately to banish war, is a story of courage and vision which Underwood writes with passion and urgency.”  —John Cornwell

“This work is the biography of Joseph Rotblat, who escaped the Nazis in Poland and worked on the Manhattan Project at Los Alamos but then labored against and led international activities against nuclear weapons. The first 32 pages of this slim work covers Rotblat’s scientific career… The next 53 pages discuss Rotblat as a public figure and his work in founding and organizing the Pugwash Conferences on Science and World Affairs. The final 65 pages are appendixes that contain Pugwash Conference statements and Rotblat’s Nobel Peace Prize acceptance speech in 1995. Author Underwood is a physicist who worked under Rotblat from 1976 to 1977 at St. Bartholomew’s Medical College in London. The major audience … will be those interested in the development of the antinuclear movement and activities and the origin of the Pugwash Conferences.”  —Choice

“Professor Sir Joseph Rotblat was a scientist and peace activist of the post-WWII period. After resigning from the Manhattan Project due to reasons of conscience, he became one of the world’s leading researchers into the biological effects of radiation. He helped found The Pugwash Conferences on Science and World Affairs, and was awarded the Nobel Peace Prize in 1995. Underwood, who worked under Rotblat at St. Bartholomew’s Medical College in the 1970s, here describes Rotblat’s personal background, details his scientific achievements and his efforts to abolish nuclear weapons, and summarizes his views on the moral responsibilities of the scientist. About 60 pages of appendices collect articles and press releases, and conference statements, papers, and speeches given by Rotblat, including his Nobel Prize acceptance speech. Underwood is a researcher for BP.”  —SciTech Book News

“Martin Underwood worked with Joseph Rotblat in 1976 and this clearly made a lasting impression which has led him to publish short articles about the impact of his life. Rotblat held the chair of Medical Physics at St Bartholomew’s Hospital Medical School from 1950 to 1976. He has also made a significant contribution as its second editor to Physics in Medicine and Biology, establishing it as an important international journal. He died in 2005 at the age of 96. This short biography looks particularly at the political impact of Sir Joseph’s life and especially at his involvement with the antinuclear movement. There are some particularly interesting items in the many Appendices, which form about a third of the book, including proceedings of several of the Pugwash conferences, of which Sir Joseph was a founding member. Of particular interest are the articles that Rotblat himself wrote describing his reasons for leaving the Manhattan Project and his acceptance speech on receipt of the Nobel Peace Prize in 1995. … Sir Joseph’s relationship with the nuclear bomb formed a very significant part of his personality and this book makes an interesting contribution on this aspect of his life and even includes his views on the Iraq war.”  —Philip Mayles, Clatterbridge Centre for Oncology NHS Foundation Trus, in Scope