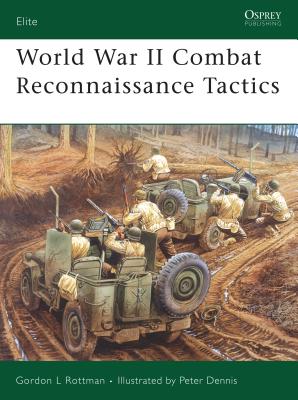 This is book number 156 in the Elite series.

Osprey's study of reconnaisance tactics of World War II (1939-1945). Combat reconnaissance, the practice of sending small groups of soldiers ahead of the main body of forces was employed by all of the major armies in World War II. They would either creep through the landscape or speed through enemy territory in light armored vehicles or jeeps, bristling with machine guns, to report on the position and strength of the enemy.

This book examines the often risky tactics and their devastating casualty rates. The equipment employed by combat reconnaissance groups during the war is investigated as are the rapid changes in tactics that resulted from operational failures, and the requirements of differing terrain and operational theaters, which saw reconnaissance forces use a range of transport from horses to boats and light tanks. Taking into account the improving radio technology available to both Axis and Allied reconnaissance forces, Gordon L Rottman provides a crucial insight into an underestimated section of the armed forces, whose work would not only save lives but noticeably affected the outcome of the war.

“...this is superbly written by the author G. Rottman and along with excellent period images and the artwork and maps of illustrator P. Dennis, makes this a book that is not only easy to follow, but one that adds much to ones knowledge of the subject. Another excellent Osprey book that I know you will enjoy reading.” —Scott Van Aken, modelingmadness.com (September 2007)