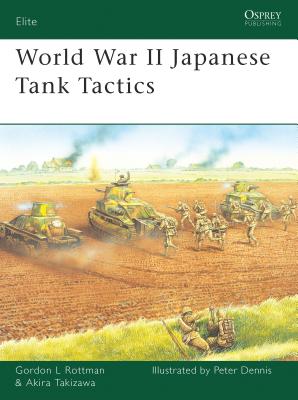 This is book number 169 in the Elite series.

Osprey's examination of Japan's tank figting tactics during World War II (1939-1945). In this book expert author and tactician Gordon L Rottman provides the first English-language study of Japanese Army and Navy tank units, their tactics and how they were deployed in action. The Japanese army made extensive use of its tanks in the campaigns in China in the 1930s, and it was in these early successes that the Japanese began to develop their own unique style of tank tactics. As Japanese tanks battled in Singapore, Malaya and Burma this Japanese vision became clearer as light tanks were deployed in the jungles of southeastern Asia, where conventional Western tactics dictated that tanks would be useless.

From the steam-rolling success of the Japanese as they invaded Manchuria until the eventual Japanese defeat, the book provides a battle history of the Japanese tank units as they faced a variety of enemies from the Chinese, to the Russians, to the British and the Americans, providing a fascinating insight into the range of tactics that were deployed against these contrasting enemies - from innovative attack procedures to desperate defensive maneuvers even as their tanks were rapidly outclassed in terms of design and armament.

“Author Rottmann and Takizawa cover the full range of units, tactics and equipment used by the Japanese during the war. Some of the results you may find quite surprising, while others are more as expected. Superbly illustrated by Peter Dennis in showing tactical movements and combined with what few period photographs are still extant on the subject, the reader gets a better idea of what these men and their equipment were like. I found the book to be particularly interesting as so little has been written on the subject for Western readers. It is a book I know you'll find of interest and is highly recommended.” —Scott Van Aken, modelingmadness.com (November 2008)

“Any aficionado of armor warfare will appreciate this book. The details in tactics and types of armor in the Imperial Japanese Army are excellent ... In addition to the detailed text, the book is full of color diagrams and black and white photographs (many from Japanese archives -- never seen by Western publishers) ... [and] an excellent reference for knowing and understanding how Japanese armor was used in World War II.” —Jeff Grim, CollectedMiscellany.com (October 2008)

“...appears for the first time in the English language, using original Japanese sources to detail the battles and strategies of the Imperial Japanese Army's tank units.” —The Midwest Book Review (January 2009)