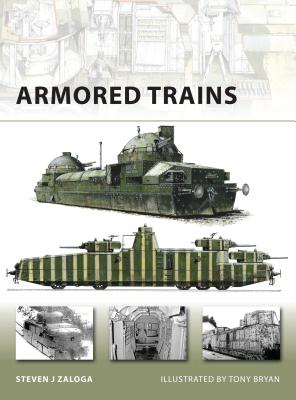 This is book number 140 in the New Vanguard series.

First seen during the American Civil War and later appearing in the Franco-Prussian War and the Anglo-Boer Wars, the armored train came to prominence on the Eastern Front during World War I. It was also deployed during the Russian Civil War and the technology traveled east into the Chinese Civil War, and the subsequent war with Japan. It saw service on the Russian Front in World War II, but was increasingly sidelined by its vulnerability to air attack. Steven J Zaloga examines the origins and development of the armored train focusing equally on the technical detail and on the fascinating story of how armored trains were actually used in combat. This title will appeal to armor, military history and railroad enthusiasts alike.
Steven J. Zaloga received his BA in History from Union College and his MA from Columbia University. He has worked as an analyst in the aerospace industry for four decades, covering missile systems and the international arms trade, and has served with the Institute for Defense Analyses, a federal think tank. He is the author of numerous books on military technology and history, including NVG 294 Allied Tanks in Normandy 1944 and NVG 283 American Guided Missiles of World War II. He currently lives in Maryland, USA.

“Valuable as an introduction to a huge and under-explored subject that is finally getting attention in model form. The size of the subject restricts the depth of the coverage as always, but shouldn't put off anyone with an interest in the subject. As always with Steve Zaloga the content is clear and well-written and similarly with Tony Bryan as illustrator, the artwork is excellent.” —David Maynard, Armorama (February 2008)

“Steven Zaloga tells the story of these interesting machines and backed by superb period photos and the artwork of Tony Bryan, provides you with an outstanding book on a truly unique subject. Get this one, you'll be pleased you did.” —Scott Van Aken, modelingmadness.com (January 2008)

“Osprey's books on armored trains and units of the Russian Civil War (RCW) are simply awesome. The Armored Trains book discusses the development of armored trains from the American Civil War (ACW) through its height in the 1920s to WWII... This Armored Trains book is my favorite of the three [from the series] -- not only does it illustrate the trains... but it discusses the tactics in which they were used -- a major plus!” —Michael Koznarsky, Historical Miniature Gamer (Issue 11)

“I must say I thoroughly enjoyed this new Edition and I'm now ready expand my modeling skills into this area. I've seen several examples of Armored Trains at past Conventions too............ENJOY!!!!!!!!” —Jack Bruno, IPMS/USA (March 2009)