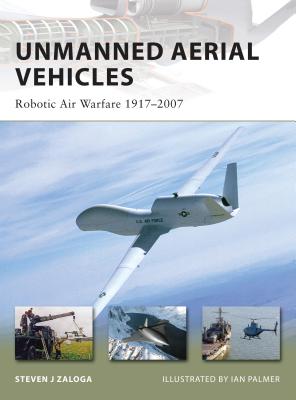 This is book number 144 in the New Vanguard series.

Unmanned aerial vehicles (UAVs) are the most dynamic field of aerospace technology, and potentially the harbingers of new aviation technology and tactics. They have only emerged from the shadows in recent years, but in fact have been in use for decades. After some limited use in World War II, UAVs began to emerge as a substitute for manned reconnaissance aircraft in the 1950s for missions deemed too dangerous to risk an aircrew. Used in significant numbers in the Vietnam War as well as less-heralded missions such as spy flights over China in the 1950s and 1960s, the contemporary UAV began to emerge in the 1980s.

This book examines the development of this unique and mysterious technology, revealing how it has changed combat through the years and speculating on its potential to transform the nature of warfare in the future. Steven J Zaloga examines the pioneering use of UAVs conducted by the Israeli air and the use of UAVs during Operation Desert Storm. Packed with rare, recently declassified photographs and detailed full-color cutaways, this title goes on to investigate the wide deployment of UAVs over Iraq and Afghanistan today, and considers the possible future of the UAV as an actual military weapon.

Ian Palmer is a highly experienced digital artist with two decades of experience in the video games industry, both as a 3D artist and an Art Director. He has a passion for military history, gaming and riding his motorbike. He lives in Warwickshire with his wife, daughter and menagerie of pets.

“Author Zaloga along with some superb photographs and the illustrations of Ian Palmer, tells the story of these vehicles from their earliest inception to the current range of vehicles to those being developed for the future. A story that has really just begun and is as fascinating today as it was when first developed. A book I know you will find interesting and informative. Highly recommended along with all of Osprey's titles in this series.” —Scott Van Aken, Modeling Madness (October 2008)

“...offers a detailed survey of the design, development and history of warfare machinery through the ages. From the early development of the technology to how it has changed combat over the years, Unmanned Aerial Vehicles is an excellent addition to military libraries, as is any other series title from Osprey.” —Midwest Book Review (January 2009)