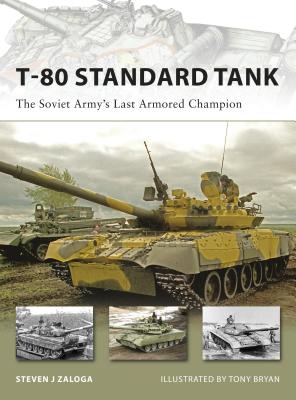 This is book number 152 in the New Vanguard series.

The Soviet T-80 Standard Tank was the last tank fielded before the Soviet collapse, and the most controversial. Like the US M1 Abrams tank, the T-80 used a turbine power plant rather than a conventional diesel. Although the design was blessed with some of the most sophisticated armament, fire controls, and multi-layer armor ever fielded on a Soviet tank, its power plant remained a source of considerable trouble through its career. It saw very little service in the Chechen War, though T-80 tanks were used in some of the regional conflicts in the former Soviet Union in the 1990s.

Although the collapse of the Soviet Union might seem the end of the story, the T-80 lived on in Ukraine where one of its tank plants was based. A diesel powered version of the T-80 was developed, the T-84, which was successfully exported, including a major sale to Pakistan to counterbalance the Indian Army's Russian T-90 tanks. Steven J Zaloga charts the little-known history of the T-80, covering the initial construction, through the development to the subsequent variants, the T-84 and Russia's enigmatic "Black Eagle Tank." Accompanying detailed cut-away artwork illustrates the unusual design features that made the T-80 so controversial.

“The book is full of photos and illustrations, mostly in color, that again, will make this a much-used modeler's book... If your interest includes modern Soviet/Russian armor, I highly recommend this book to you... This volume gives you a developmental history that is easy to read and understand, plus the many photos and illustrations chosen with the modeler in mind, make this a very valuable asset to every modelers library.” —Howie Belkin, IPMS/USA

“Steven J Zaloga's T-80 Standard Tank: The Soviet Army's Last Armored Champion offers a narrowed focus for speciality military collections focusing on military equipment. The T-80 was the last tank fielded before the collapse of the Soviet Union -- and the most controversial. Its history is revealed with photos and discussion.” —California Bookwatch (April 2009)