Panther vs Sherman: Battle of the Bulge 1944 (Duel) (Paperback) 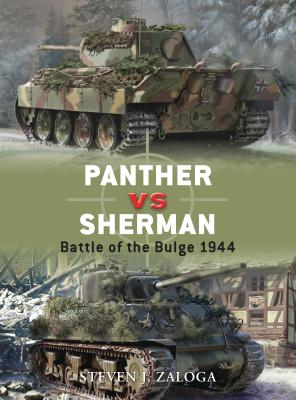 Panther vs Sherman: Battle of the Bulge 1944 (Duel) (Paperback)

This is book number 13 in the Duel series.

In this book Steven J Zaloga offers a fascinating comparison of the combat performance of the two most important tanks involved in the crucial fighting of 1944, the Sherman and the Panther. Examining the design and development of both tanks, Zaloga notes the obvious superiority that the Panther had over the Sherman and how the highly engineered German tank was eventually beaten back, not necessarily by the improvements made to the Sherman, but rather by the superior numbers of tanks that the Allies were able to put into the field.

Putting the reader into the heart of this battle between quality and quantity Zaloga examines the tactical intricacies of the battles between these two rivals. Using a compelling account of the ferocious fighting in the Ardennes region to explain the successes and failures of each tank he also highlights the fact that a tank can only be as good as its crew, weighing up the impact of low morale, high cost and mediocre crew training on the Panthers superiority. Packed with full-colour battlescenes, technical drawings, photographs, digital gunsight views, extracts from crew training manuals and real combat reports, this book brings to life the titanic battles between the Sherman and the Panther.

“Provides a specialty focus on the machines of war which were designed and developed with the battle environment at hand.” —California Bookwatch (November 2008)

“I truly liked the illustrations by Jim Laurier. Throughout the book, there were side by side comparisons of the vehicles, their turrets, even their gun sights. This backed up the liberal use of photographs showing both vehicles in many different views. This is an easy book to read, and would be welcomed by any reader with an interest in either of these fighting vehicles.” —Thomas Houlihan, World War II Database (September 2009)

“For Duel #13 we have the first repeat antagonists. Both the Panther and the Sherman have been covered before, but not against each other ... [Everything] is superbly covered by author Steven Zaloga and thanks to excellent art work and period photos, his points are well illustrated ... Another superb addition to what has become a very popular series...” —Scott Van Aken, modelingmadness.com (October 2008)