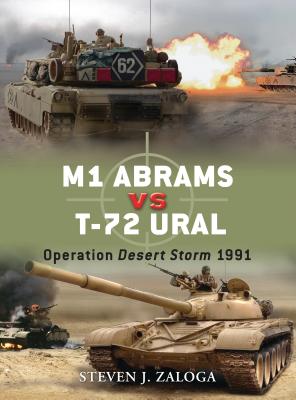 This is book number 18 in the Duel series.

The Gulf War bore witness to a number of deadly encounters between these two great adversaries. Heavily armored, highly mobile and capable of killing at over 2500m the M1 Abrams is, to this day, a veritable fighting machine. Superior to both Iraq's Soviet era T-55 and T-62 tanks, nearly all sources claim that no Abrams tank has ever been destroyed by enemy fire. Despite entering service in 1980, the M1 Abrams remained untested in combat until the Gulf War in 1991, where it was to be confronted by its archenemy the Iraqi-assembled Soviet-designed T-72. Entering production in 1971, the T-72 arguably outstripped its contemporaries in a balance of mobility, protection and firepower. By the time of Operation Desert Storm, however, the tables had turned and the tank suffered due to low quality ammunition and poorly trained crews. In this fascinating study, Steven Zaloga pits these two great fighting machines against one another, plotting the development of the Cold War until both tanks met in combat in the deserts of Iraq and Kuwait.
Steven J. Zaloga received his BA in History from Union College and his MA from Columbia University. He has worked as an analyst in the aerospace industry for four decades, covering missile systems and the international arms trade, and has served with the Institute for Defense Analyses, a federal think tank. He is the author of numerous books on military technology and history, including NVG 294 Allied Tanks in Normandy 1944 and NVG 283 American Guided Missiles of World War II. He currently lives in Maryland, USA.

“Steven Zaloga weaves a compelling narrative which balances its treatment of both vehicles. He is careful to point out that the reader cannot discern too much about the effectiveness of the T-72 in the hands of the Iraqis. However, he does lay out several distinct weaknesses of the export T-72 that might not have altered the balance even in well trained and experienced hands. If you have only a mild interest in modern armor, this is a book well work picking up.” —Charles Landrum, IPMS (February 2010)

“I was particularly impressed by the interior photos, cutaway drawings and gunsight views. The detailed descriptions of the various crew functions also made for interesting reading for me...  Overall, a very enjoyable read which gave me a much clearer insight into the superiority of the Abrams to the T72M1.” —Steve Allen, AMPS (October 2009)

“Author Zaloga follows a tried and true format in this Duel book by first providing the design and development of both tanks. There is then a section on the technical specifications of each followed by a look at the military in which both were used and how they trained for battle. Next is a look at the situation prior to the start of the war and then a look at some of the more important battles in which these two tanks were used. Finally, an analysis of how these tanks fared; their strengths and weaknesses. Overall, it makes for a most interesting read and provides a good look at these two important MBTs. It is a book that I thoroughly enjoyed reading and I'm sure you will as well. Like all Osprey titles it is one that I can easily recommend to you.” —Scott Van Aken, Modeling Madness, modelingmadness.com (October 2009)