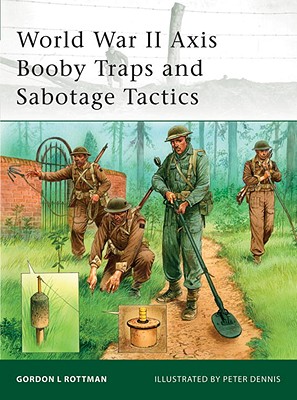 This is book number 100 in the Elite series.

Booby traps laid by troops in war zones in World War II (1939-1945) are largely neglected in histories and memoirs, and rarely examined in detail. Yet for a soldier, the threat of booby traps was hugely significant and the ability to find and disarm them was essential. This is the first comprehensive study of World War II Axis battlefield sabotage equipment, using information from rare wartime intelligence publications covering both Allied and Axis practice to identify, illustrate and describe the vintage munitions used in World War II. Examining all aspects of this secretive subject, from the equipment used to the techniques of placing and uncovering them, this book is an invaluable resource, revealing the daily risks faced by soldiers on the ground through the course of the war.
Gordon L. Rottman entered the US Army in 1967, volunteered for Special Forces and completed training as a weapons specialist. He served in the 5th Special Forces Group in Vietnam in 1969–70 and subsequently in airborne infantry, long-range patrol and intelligence assignments until retiring after 26 years. He was a Special Operations Forces scenario writer at the Joint Readiness Training Center for 12 years and is now a freelance writer, living in Texas.

“World War II Axis Booby Traps and Sabotage Tactics offered me a different perspective of the war, not one that I regularly see when researching WW2 topics. For that alone, the book gets a 'thumb up' from me.” —C Peter Chen, World War II Database, ww2db.com (August 2009)

“In all, it is another fascinating Osprey title on a subject that we all know about to some extent. Now all of that information is in one place in a book that is highly readable and quite interesting. One I know that you will enjoy.” —Scott Van Aken, www.modelingmadness.com (August 2009)