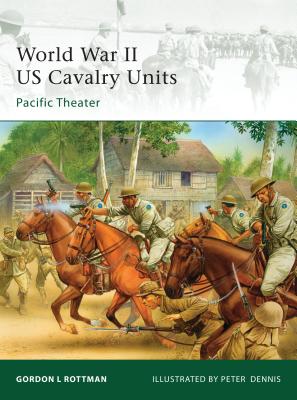 This is book number 175 in the Elite series.

Osprey's elite series title for all cavalry units that participated in World War II (1939-1945). At the time of Pearl Harbor, the United States Army still had ten cavalry regiments that were mounted on horses. One, the 26th (Filipino Scouts) fought on horseback in the Philippines, while the rest were dismounted and fought as infantry. Despite this, the cavalry units maintained their own unique organization, traditions, and identity as they saw action in the Pacific and China-Burma-India theatre.

This book covers all of the US cavalry units to see action during World War II, most of which survive to this day. It includes the little-covered Texan National Guard regiments, who took part in the vicious street fighting in Manila in 1945, and who fought beside ex-Merrill's Marauders as a deep penetration unit. It also contains detailed color-plates showing the unique uniforms of the US Army's last mounted cavalry as well as tropical combat dress worn by the dismounted units.

“World War II US Cavalry Units: Pacific Theater was a fine tribute to the cavalry troops, and it documented the start of their modernization in the WW2-era concisely.” —C. Peter Chen, World War II Database (October 2009)

“In this book in the Elite series, author Gordon Rottman takes a look at the pre-war disposition of US cavalry units and their organization. Then the book goes into how these units operated during the war, with particular attention given to the 26th Cavalry Regiment, the Texan National Guard units that fought in the Southwest Pacific and in the Burma theathers, as well as the 1st Cavalry Division (Special) and its operations in the Philippines late in the war. All of this is superbly illustrated by artist Peter Dennis and by a fine collection of period photographs. As this series is as much a uniforms and equipment  book as it is a history, that aspect is covered as well. In all, a fascinating look at portion of US military history that is often overlooked.” —Scott Van Aken, Modeling Madness, www.modelingmadness.com (February 2010)