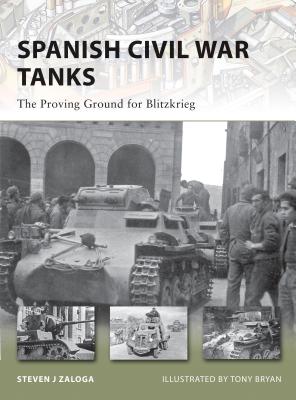 This is book number 170 in the New Vanguard series.

The tanks used during the Spanish Civil War are not often examined in any great detail, and are often labeled as little more than test vehicles in a convenient proving ground before World War II. But, with groundbreaking research, armor expert Steven J Zaloga has taken a fresh look at the tanks deployed in Spain, examining how future tanks and armored tactics were shaped and honed by the crews' experiences, and how Germany was able to benefit from these lessons while their Soviet opponents were not.

Based on recently uncovered records of Soviet tankers in Spain and rare archival accounts, this book describes the various tanks deployed in Spain, including the PzKpfw I and the T-26.

Steven J. Zaloga received his BA in History from Union College and his MA from Columbia University. He has worked as an analyst in the aerospace industry for four decades, covering missile systems and the international arms trade, and has served with the Institute for Defense Analyses, a federal think tank. He is the author of numerous books on military technology and history, including NVG 294 Allied Tanks in Normandy 1944 and NVG 283 American Guided Missiles of World War II. He currently lives in Maryland, USA.
“A very readable little book which challenges some of the myth that goes with the subject...  ideal if you just want to find out a bit about the  armour used in the Spanish Civil War, and good ideas for modellers as well.” —Robin Buckland, militarymodelling.com