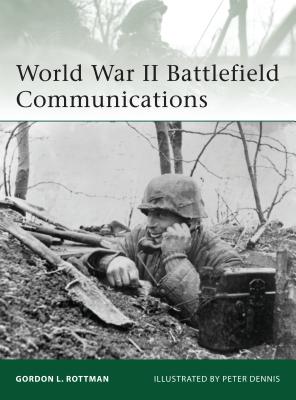 This is book number 181 in the Elite series.

Osprey's examination of technological advances in communications during World War II (1939-1945). Perhaps the biggest difference in the fighting between the two World Wars lay in the invention of the man-portable radio that allowed for a greater degree of tactical coordination than ever before. Gordon L. Rottman provides an informative study of the use of small radios, field telephones, signal flares and ground-to-air signaling that revolutionized the battlefield.
Gordon L. Rottman entered the US Army in 1967, volunteered for Special Forces and completed training as a weapons specialist. He served in the 5th Special Forces Group in Vietnam in 1969–70 and subsequently in airborne infantry, long-range patrol and intelligence assignments until retiring after 26 years. He was a Special Operations Forces scenario writer at the Joint Readiness Training Center for 12 years and is now a freelance writer, living in Texas.

Peter Dennis was inspired by contemporary magazines such as Look and Learn, leading him to study Illustration at Liverpool Art College. Peter has since contributed to hundreds of books, predominantly on historical subjects, including many Osprey titles. A keen wargamer and modelmaker, he is based in Nottinghamshire, UK.
“... an informative study of how radio communications revolutionized the battlefield through the use of manportable radios, field telephones, signal flares and ground-to-air signaling. Included in this book are over 50 photographs and 8 full-color plates detailing US, British, Soviet, German and Japanese equipment.” —www.mataka.org (November 2010)