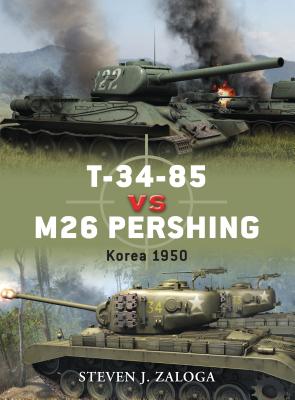 This is book number 32 in the Duel series.

A hotly-debated topic amongst tank buffs is of the relative merits of the Soviet and American tanks of World War II. Using recently revealed documents, Steven Zaloga sheds light on the crucial tank battles of the Korean War as the rival superpowers' finest tanks battled for supremacy. The Soviet-equipped North Korean Peoples Army initially dominated the battlefield with the seemingly unstoppable T34-85. As US tank battalions hastily arrived throughout the late summer and early autumn of 1950, the M26 Pershing took the fight to North Korea with increasing success.
Steven J. Zaloga received his BA in history from Union College and his MA from Columbia University. He has worked as an analyst in the aerospace industry for over two decades, covering missile systems and the international arms trade, and has served with the Institute for Defense Analyses, a federal think-tank. He is the author of numerous books on military technology and military history, with an accent on the US Army in World War II as well as Russia and the former Soviet Union.