Pandaemonium, 1660-1886: The Coming of the Machine as Seen by Contemporary Observers (Paperback) 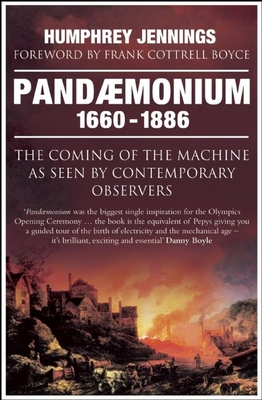 Pandaemonium, 1660-1886: The Coming of the Machine as Seen by Contemporary Observers (Paperback)

Pandaemonium was the biggest single inspiration for the Olympics Opening Ceremony . . . the book is the equivalent of Pepys giving a guided tour of the birth of electricity and the mechanical age--it's brilliant, exciting, and essential.--Danny Boyle

Humphrey Jennings was a film maker and one of the co-founders of the Mass Observation Project.

Humphrey Jennings was educated in Cambridge at school and at Pembroke College, where he read English. He joined the GPO Film Unit in 1934. In 1936 he, Tom Harrisson and Charles Madge founded Mass Observation, and in the same year he exhibited at the International Surrealist Exhibition. He is best known for the documentary films he made during the war. He died in 1950.