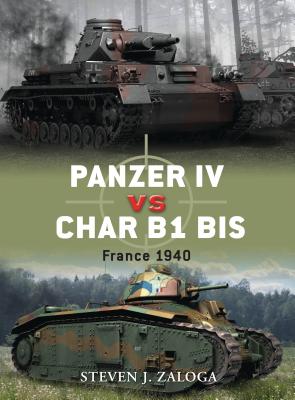 This is book number 33 in the Duel series.

The Battle of France in 1940 involved the first large-scale tank-against-tank battles in history. The massive clashes at Stonne, Hannant, and Gembloux involved hundreds of tanks on both sides, yet have faded from memory due to the enormity of the French defeat. This book examines two of the premier opposing tanks of the Wehrmacht and the French Army, the German PzKpfw IV and the French Char B1 bis. With a complete history of the design, development, and deployment of these armored fighting vehicles, the story of these great battles is brought to life in a highly illustrated format.
Steven J. Zaloga received his BA in History from Union College and his MA from Columbia University. He has worked as an analyst in the aerospace industry for four decades, covering missile systems and the international arms trade, and has served with the Institute for Defense Analyses, a federal think tank. He is the author of numerous books on military technology and history, including NVG 294 Allied Tanks in Normandy 1944 and NVG 283 American Guided Missiles of World War II. He currently lives in Maryland, USA.

“... why were the Germans able to destroy the French Armies in such a short period of time [during WWII]?  From the tank vs. tank perspective, this book reveals all. I found it easy to read, easy to understand, and very enlightening. I recommend it highly to anyone interested in this aspect of military history.” —Andrew Birkbeck, IPMS/USA

“I am delighted that an authority like Mr. Zaloga has created this comparison of the Char B1 bis and the PzKpfw IV. While the book is extremely detailed, it remains gripping and easy to read.” —Frederick Boucher, Armorama