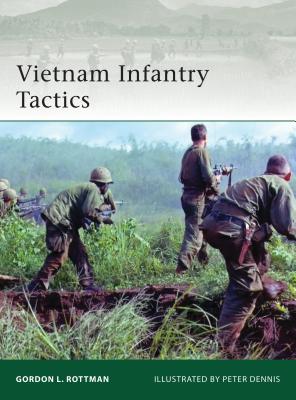 This is book number 186 in the Elite series.

Osprey's study of the evolving US, Viet Cong and NVA tactics at battalion level and below throughout the Vietnam War (1955-1975). Beginning with a description of the terrain, climate and the unique nature of operations in this theater of war, author Gordon Rottman, a Vietnam veteran himself, goes on to explain how unit organization was broken down by combatant forces and the impact this had on the kind of tactics they employed. In particular, Rottman highlights how units were organized in reality on the battlefield as opposed to their theoretical tables of organization.

US tactics included the standard US tactical doctrine as prescribed by several field manuals and in which leaders and troops were rigorously trained. But it also reveals how many American units developed innovative small unit tactics specifically tailored to the terrain and enemy practices. Key Free World Forces' tactics that will be discussed in detail include Command and Control, Combat Patrols and Ambushes, Counter-Ambushes, Defensive Perimeters, and Offensive Operations (sweeps, search and destroy, clear and secure). In contrast, this book reveals the tactics employed by Viet Cong and NVA units including their own Offensive Operations (attacking bases and installations, attacking moving forces), Reconnaissance, Movement Formations and Security, and Ambushes.

“This is an extremely interesting work for anyone wishing to understand the part that boots on the ground tactics played during the still controversial Vietnam War.” —Blaine Taylor, The Military Advisor (Summer 2012)

“...[looks] at the war from both perspectives -- the US and the Viet Cong.  As a result, it is possible to compare the differing tactics adopted by each side. This is an ideal book for anyone who wants to understand what happened on the ground during the Vietnam War. Well researched, and well written, it will be of interest no matter how little or how much knowledge you have of this war.” —Angela Youngman, www.monstersandcritics.com

“Vietnam Infantry Tactics comes from an infantry veteran of Vietnam and provides a fine survey of small-unit tactics of the conflict.” —The Midwest Book Review (September 2011)