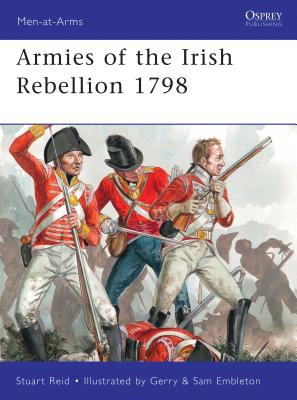 This is book number 472 in the Men-at-Arms series.

A stunning exploration of a legendary moment in Irish history. In 1798 with the British Army preoccupied in fighting France in the Caribbean and Mediterranean as well as guarding Southeast England from threatened invasion, a co-ordinated uprising broke out across the water in Ireland. Uniquely this was neither a Catholic nor a Protestant rebellion, but rather a joint effort by leaders and insurgents from both sides of the community. The Irish Rebellion (1798) was directed against the corrupt government based at Dublin Castle and was inspired in part by the people's revolutions in America and France. This title illuminates the lives of the Irish peasants, armed mostly with pikes, who confronted the small number of British troops based in their country.
Stuart Reid was born in Aberdeen in 1954 and is married with two sons. He has worked as a librarian and a professional soldier and his main focus of interest lies in the 18th and 19th centuries. This interest stems from having ancestors who served in the British Army and the East India Company and who fought at Culloden, Bunker Hill and even in the Texas Revolution. His books for Osprey include the highly acclaimed titles about King George's Army 1740-93 (Men-at-Arms 285, 289 and 292), and the British Redcoat 1740-1815 (Warrior 19 and 20).

Gerry Embleton has been a leading illustrator and researcher of historical costume since the 1970s, and has illustrated and written Osprey titles on a wide range of subjects for more than 20 years. He is an internationally respected authority on 15th and 18th century costumes in particular. He lives in Switzerland, where since 1988 he has also become well known for designing and creating life-size historical figures for museums.