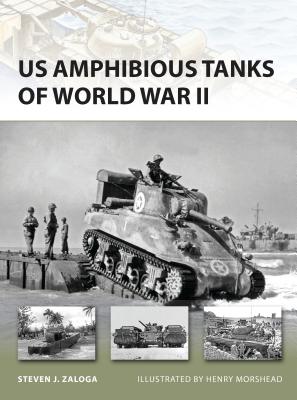 This is book number 192 in the New Vanguard series.

The advent of combined arms operations in World War II created the need for specialized armored vehicles. In the case of amphibious attacks, the issue arose of how best to land tanks on a beach. Although a variety of specialized landing craft were developed, the Dieppe raid in 1942 encouraged the development of tanks that could be deployed from further off-shore to limit the vulnerability of the LCT craft. The deep-wading equipment that they developed was first used during Operation Husky on Sicily in July 1943, and subsequently for Operations Avalanche (Salerno, September 1943), Shingle (Anzio, January 1944) and Overlord (Normandy, June 1944). The US-manufactured DD tanks were used during Overlord by both US and British forces, and again in 1945 during the Rhine crossings. Initially, developments in the Pacific Theater were separate from those in Europe. The Marines learned from the Tarawa landings in 1943 that unprepared tanks could not be safely landed even in shallow water. DD tanks were never seriously considered for the Pacific, so other solutions were sought. A detailed study of specialized US amphibious tanks, this is a title that will appeal to those interested in both Pacific and European Theaters, modellers and collectors.
Steven J. Zaloga received his BA in History from Union College and his MA from Columbia University. He has worked as an analyst in the aerospace industry for four decades, covering missile systems and the international arms trade, and has served with the Institute for Defense Analyses, a federal think tank. He is the author of numerous books on military technology and history, including NVG 294 Allied Tanks in Normandy 1944 and NVG 283 American Guided Missiles of World War II. He currently lives in Maryland, USA.

“This review of US amphibious tanks covers design, deployment, amphibious strategies and more, and makes for a powerful survey for any World War II collection strong in equipment analysis.” —The Midwest Book Review (November 2012)

“Steven J. Zaloga does his usual masterful job of telling the story of the amphibious tank. From its beginnings to testing to all of its various operational uses, it is all right here. In addition, there are the usual large number of period photos and excellent illustrations to go along with it. It is a great addition to the New Vanguard series and book that will be pulled from your reference shelf time and time again.” —Scott Van Aken, Modeling Madness