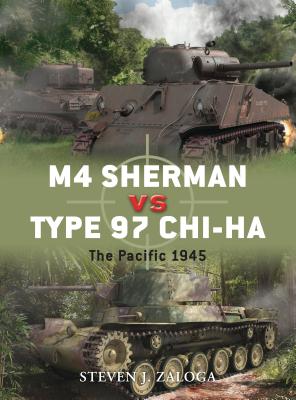 This is book number 43 in the Duel series.

While the Pacific campaign is not well known as a theater for tank combat, the US Army deployed nearly a third of its tank battalions to the Pacific, and Japan was among the top five tank manufacturers during the war. The obscurity of Pacific tank battles largely hinged on the tactics used in the Pacific theater due to terrain. Tanks were generally used as infantry support weapons, and the terrain precluded the use of tanks in maneuver warfare that might have led to large scale tank-vs.-tank battles. This book begins by surveying the early tank battles in the Pacific between US and Japanese forces, starting with the first encounters in the Philippines in 1941 between US M3 Stuart light tanks and Japanese Type 95 tanks. Tank-vs.-tank action became more common in 1944 as both sides poured larger numbers of tanks into the combat zone. The largest Japanese tank attack of war took place in July 1944 on Saipan, but there were frequent tank encounters in the ensuing months on Guam, and Peleliu. The Philippines saw the largest Japanese tank deployment of the war, with the Japanese sending a tank division to Luzon in 1944. This led to extensive clashes with US army forces, sometimes pitting tank vs. tank, but often a mixture of tanks, infantry anti-tank weapons, and even self-propelled guns. The last two campaigns of the war on Iwo Jima and Okinawa saw tank use on the part of both sides, the Japanese finally concluding that "the fight against the US Army is a fight against his M4 tanks".

This book will take a look at the two best tanks of the Pacific campaign. On the American side, the M4A3 Sherman medium tank was used by both the US Army and US Marine Corps. On the Japanese side, the Type 97-kai Shinhoto Chi-Ha was the best tank to see combat. This was a very uneven contest, which is the main reason that in 1944 on Luzon, the Japanese were so reluctant to deploy the Chi-ha against the Sherman and preferred to use them as dug-in pillboxes. The book illustrations will follow the usual Duel pattern with profile illustrations of the Type 97-kai Shinhoto Chi-ha and M4A3, views showing the ammunition of both types, interior illustrations showing the turret layout in both types, and a Battlescene showing the Type 97-kai in combat against US armor.

Richard Chasemore completed a four-year course in technical illustration in 1992. Since then, he has worked on a wide variety of projects in publishing and advertising, using both traditional and digital media. He has lectured in airbrush techniques, and written six educational books on digital art. A long-standing contributor to the top-selling Star Wars Incredible Cross Sections series, his contribution has taken him to Skywalker Ranch in California to work with Lucasfilm's concept artists. Richard also enjoys music and is a co-founder of Superglider Records.
“This terrific tome deserves a spot in every WWII enthusiast's library.” —David L. Veres, www.cybermodeler.com