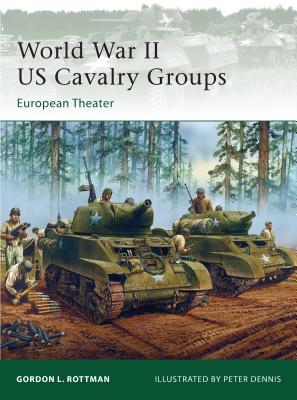 This is book number 129 in the Elite series.

The cavalry regiments of the US Army were in the process of being transformed into a mechanized force when the USA entered World War II. While those cavalry regiments deployed to the Pacific to fight the Japanese were turned into infantry units, those sent to Europe were employed as light armor in the cavalry's traditional spearhead roles - reconnaissance, the screening of advances and flanks, and the pursuit of beaten enemy forces.

Equipped with M8 Greyhound armored cars, M5 Stuart and M24 Chaffee light tanks, and halftracks, these units were designated cavalry groups (mechanized), each c. 1,700 strong and divided into two heavily armed squadrons. They were seldom attached to divisions, but to higher-level corps commands, meaning they could be shifted around quickly and independently and be formed at need into flexible battle groups with armored, infantry, and other units, depending on the mission. Thirteen CG(M)s fought in Europe, seeing a great deal of action - they were usually the first units in contact with the enemy, and, because of their mobility and freelance role, the ones sent as "fire brigades" to block dangerous gaps.

Featuring specially drawn full-color illustrations depicting uniforms, insignia, armored vehicles, and tactical scenarios, this is the story of the US cavalry units that led the advance to victory in Europe during World War II.

Peter Dennis was inspired by contemporary magazines such as Look and Learn, leading him to study Illustration at Liverpool Art College. Peter has since contributed to hundreds of books, predominantly on historical subjects, including many Osprey titles. A keen wargamer and modelmaker, he is based in Nottinghamshire, UK.
“In this book, author Gordon Rottman takes a look at the changes and organization of US cavalry units in the early 1940s. He has a look at their training and the equipment they used before and during the war. There is a complete section that offers some of the more memorable exploits of various units as they fought after D-day. We also have a look at what was learned from the experiences of combat in Europe. All of this is superbly illustrated by period photo and by the excellent artwork of Peter Dennis, one of Osprey's best illustrators. This includes not only battle scenes but also well illustrated organizational charts.” —Scott Van Aken, Modeling Madness (November 2012)