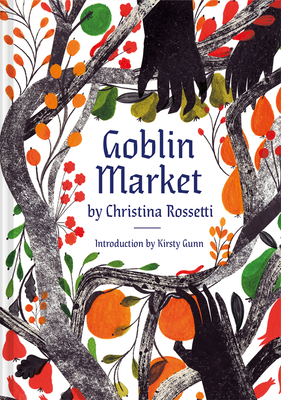 The classic poem, Goblin Market (1862) by Christina Rossetti, tells the story of Lizzie and Laura, who are tempted by the fruit sold by the goblin merchants. In this fully illustrated and beautiful volume, illustrator Georgie McAusland brings the words and story to life.

Breathing new life into the Victorian tradition of illustrated poems, this book reads like a picture story book. The stunning illustrations illuminate and drive the narrative forward as in all good story books. It tells the tale of the two sisters drifting apart as Laura succumbs to the forbidden fruit sold by the goblins, but the bonds of sisterhood prove strong. The poem has fascinated for generations and been the subject of various interpretations. This illustrated version brings the words and story alive for a new generation.

Christina Rossetti is considered the foremost female poet of her time, and her poetry still resonates with women's lives today, as she entwines themes of sexuality, sisterhood, love and temptation in her work. All of these themes are encapsulated in Goblin Market. The book includes an introduction to the poem by novelist Kirsty Gunn, so all readers – for pleasure or study – can understand its riches.

Kirsty Gunn is a novelist and writer of short stories. Her stories include "Rain", which led to the 2001 film of the same name, and her novel The Boy and the Sea won the Scottish Arts Council Book of the Year award in 2007. Her 2012 novel The Big Music won the Book of the Year in the 2013 New Zealand Post Book Awards. She is professor of writing practice at the University of Dundee.

‘This new edition has bold, simple but moving illustrations by Georgie McAusland. If you don’t know Goblin Market, it’s a must-read.‘