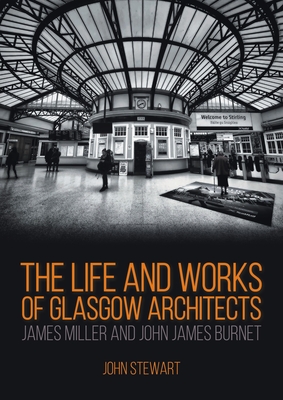 
Special Order—Subject to Availability
This is the first full biography of two of Scotland's most eminent Architects, James Miller and John James Burnet. While born just three years apart into very different circumstances - Burnet was the son of a wealthy Glasgow architect and Miller a farmer's son - their careers and lives became intertwined as they competed for work and eventually the role of Scotland's leading architect. Born in 1857 and 1860 respectively, one inherited and the other established successful practices in Glasgow at the zenith of that city's wealth in the late 19th century.John James Burnet, who was educated at the cole des Beaux Arts in Paris, and led his profession in Glasgow in the latter years of the 19th and early years of the 20th centuries, produced many of the city's finest buildings. These include The Athenaeum on Buchanan Street; Charing Cross Mansions; numerous city-centre commercial buildings such as Waterloo Chambers and Atlantic Chambers and the Townhouses on University Avenue. After moving to London, his work included the extension of the British Museum, The Daily Telegraph Building on Fleet Street and Adelaide House by London Bridge. Burnet was knighted and awarded the RIBA's Gold Medal in 1923 and is recognized as one of Scotland's finest architects. James Miller is simply Scotland's most prolific architect. During his long career he designed The Empire Exhibition of 1901, Glasgow Royal Infirmary, Glasgow Central Station, Wemyss Bay Station, St Enoch's Underground Station, Turnberry Hotel, Peebles Hydro Hotel, Gleneagles Hotel, the interiors of the SS Lusitania and SS Aquitania, Hampden Park, Forteviot Model Village, the Institution of Civil Engineers in Westminster, numerous banks, commercial buildings and churches in Glasgow and beyond as well as schools, country houses, factories and town halls. Despite this extraordinary output and his considerable architectural contribution to Scotland's heritage, he has received relatively little acclaim, until now.This is a fascinating double biography, the story of Burnet and Miller's parallel lives and work, set against the background of the booming Empire's 'Second City'.
John Stewart is an architect and author and a former vice-president of a world leading company. He was twice selected as one of the best 40 Architects under Forty in the UK, is a winner of RIBA awards and has numerous publications to his name.