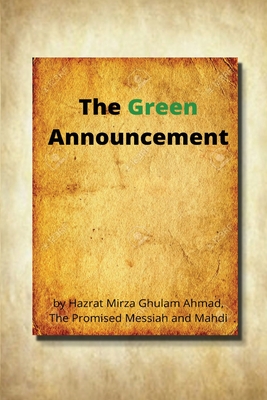 The Green Announcement was written by Hazrat Mirza Ghulam Ahmad of Qadian(as), the Promised Messiah and Mahdi, Founder of the Ahmadiyya Muslim Community, to remove the doubts and misgivings that had arisen out of the death of his son who has come to be known as Bashir the First. Bashir was born on 7th August 1887 and died on 4th November 1888.

Previously the Promised Messiah(as) had announced, on the basis of Divine revelations, that God had promised to grant him a son who would possess extraordinary qualities, would have a long life, and would be Musleh Mau'ud (the Promised Reformer).

Thus when Bashir the First died after sixteen months, the opponents pounced at the opportunity and began denouncing the Promised Messiah(as) ever more vehemently. In this announcement, the Promised Messiah(as) made it clear that he had never claimed that this particular boy would be the Promised Reformer. He also forcefully reiterated that the promised child would be born within the nine year period specified in the prophecy (1886-1895).

Subsequent events showed each and every word of the prophecies to be true. In keeping with the prophecies, Bashir the Second (Hazrat Mirza Bashiruddin Mahmood Ahmad, Khalifatul Masih II(ra)) was born on 12th January 1889. He was gifted with such extraordinary and unique qualities as were acknowledged by friend and foe alike. He died at the age of 76 after a life of tremendous achievement and is remembered as Musleh Mau'ud or the Promised Reformer.