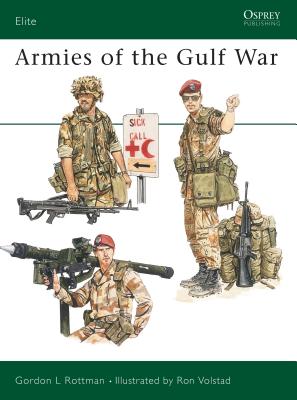 This is book number 45 in the Elite series.

Osprey's examination of US troops during the Persian Gulf War (1990-1991). Besides continuing a long history of world-wide peacekeeping, the commitment of US troops to the Gulf reunified the country and restored a national pride lost in the aftermath of Vietnam. It also proved that the US armed forces were again the most capable military force in the world. This volume by veteran Osprey author Gordon L. Rottman focuses on the structure, equipment, effectiveness, and employment of the 680,000 coalition troops which fought in the Gulf War, covering not only the US forces, but also those of Britain, France, the Arab League and Iraq.
Gordon L. Rottman entered the US Army in 1967, volunteered for Special Forces and completed training as a weapons specialist. He served in the 5th Special Forces Group in Vietnam in 1969–70 and subsequently in airborne infantry, long-range patrol and intelligence assignments until retiring after 26 years. He was a Special Operations Forces scenario writer at the Joint Readiness Training Center for 12 years and is now a freelance writer, living in Texas.