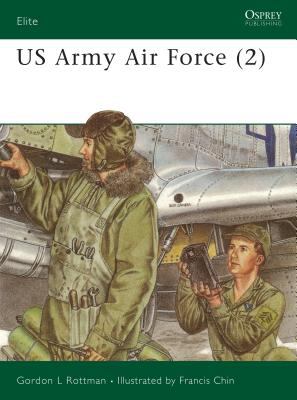 This is book number 51 in the Elite series.

While the most conspicuous components of the US Army Air Forces in World War II (1939-1945) were the air units, there were also hundreds of ground units and organisations. Besides assigned military personnel the AAF also employed thousands of civilians. Many unique outfits were designed to meet the AAF's special needs. Uniformed civilians also possessed a variety of unique uniforms and insignia. These general issue and specific uniforms are the subject of this volume by one of Osprey's most experienced authors, Gordon L. Rottman, whose detailed text is backed by plenty of contemporary photographs and 12 full page colour plates by Francis Chin.
Gordon L. Rottman entered the US Army in 1967, volunteered for Special Forces and completed training as a weapons specialist. He served in the 5th Special Forces Group in Vietnam in 1969–70 and subsequently in airborne infantry, long-range patrol and intelligence assignments until retiring after 26 years. He was a Special Operations Forces scenario writer at the Joint Readiness Training Center for 12 years and is now a freelance writer, living in Texas.