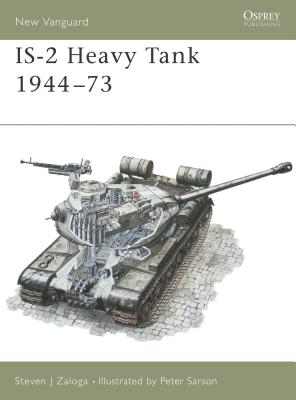 This is book number 7 in the New Vanguard series.

The Iosef Stalin tanks were the ultimate heavy tanks developed by the Soviet Union and were popularly called 'Victory tanks' due to their close association with the defeat of Germany in 1945. Yet in spite of their reputation, the Stalin tanks emerged from a troubled design, had a brief moment of glory in 1944 and 1945, and disappeared in ignominy after 1960. This title covers the events contributing to the Soviet Union's need to design the new series, with particular reference to the unsuccessful KV series and the advent of a new generation of heavy German tanks including the Tiger. It also covers their development, operational history and myriad variants.
Steven J. Zaloga received his BA in History from Union College and his MA from Columbia University. He has worked as an analyst in the aerospace industry for four decades, covering missile systems and the international arms trade, and has served with the Institute for Defense Analyses, a federal think tank. He is the author of numerous books on military technology and history, including NVG 294 Allied Tanks in Normandy 1944 and NVG 283 American Guided Missiles of World War II. He currently lives in Maryland, USA.