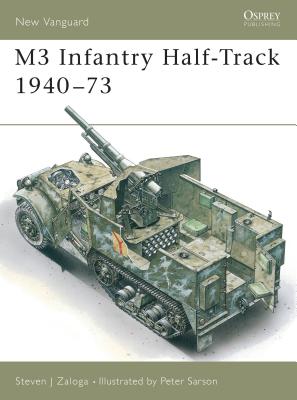 This is book number 11 in the New Vanguard series.

As armoured warfare tactics matured, mechanised infantry became a key ingredient in what is now called 'combined arms' doctrine. For the US Army of World War 2, the most important technical aspect of infantry mechanisation was the development of the M3 half-track personnel carrier. Steven Zaloga guides the reader through the early 1930s development of the half-track, its first deployment in action in the Philippines in 1941 and its varied and vital role in international deployments since World War 2. This authoritative text also examines the operators of half-tracks and the troops that they carried.
Steven J. Zaloga received his BA in History from Union College and his MA from Columbia University. He has worked as an analyst in the aerospace industry for four decades, covering missile systems and the international arms trade, and has served with the Institute for Defense Analyses, a federal think tank. He is the author of numerous books on military technology and history, including NVG 294 Allied Tanks in Normandy 1944 and NVG 283 American Guided Missiles of World War II. He currently lives in Maryland, USA.