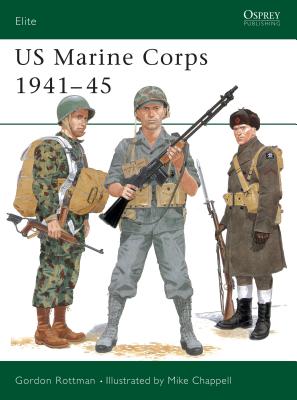 This is book number 59 in the Elite series.

While the US Marine Corps was one of the smallest of American armed services in World War II (1939-1945), its contribution to the final victory cannot be overstated. The US Marine Corps may have only comprised 5 percent of America's armed forces, but it suffered 10 percent of all World War II combat casualties. Above all, the amphibious nature of the war in the Pacific imposed on the Marine Corps greater tasks than any it had ever before been called upon to perform. This title details the organization, weapons and equipment of the US Marines of World War II.
Gordon L Rottman entered the US Army in 1967, volunteered for Special Forces and completed training as a weapons specialist. He was assigned to the 7th Special Forces Group until reassigned to the 5th Special Forces Group in Vietnam in 1969–70. He entered the Texas Army National Guard in 1974 and was the full-time Operations Sergeant of 2nd Bn., 143rd Inf., 36th Airborne Brigade until 1980, when he assumed a similar position with Co. G (Ranger), 143rd Inf. He is now a civilian contract Special Operations Forces Intelligence Specialist at the Army's Joint Readiness Centre, Ft Polk.